Borneo, One of the World's Last Natural Paradises | Bridgestone Libertadores 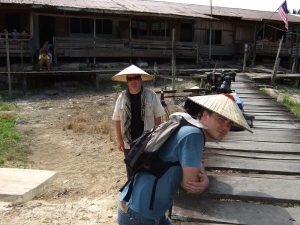 Year after year, oil palm plantations destroy Borneo’s wonderful rain forest. Palm oil is the main ingredient in a wide range of products such as toothpaste, soap, beauty cosmetics, and chocolate. Consumers of all these products can help protect the oldest rain forest on our planet.

Palm oil is one of the most sought-after oils in our modern society, after petroleum. Palm oil production is a market of $50 billion per year. You can find it in products scattered everywhere on the globe, in America, Europe, and Australia. It is one of the main ingredients in toothpaste, shampoo, lipstick, and face cream, but also in Nutella, cookies, and even Doritos. Without palm oil, chocolate bars would be tasteless and not appealing at all. In India, palm oil has replaced the traditional and not so healthy ghee in thousands of cooking recipes. Over the past decade, India has become one of the biggest consumers of palm oil worldwide. They extract this oil from the nuts of the oil palm tree that grows everywhere in the region.

Borneo is known for its dipterocarps, trees that produce double-winged fruits that can easily become airborne and fly above the canopy, spreading the seeds of this plant at impressive distances. Apparently, 380 out of the 500 known species of dipterocarps grow here, on Borneo. Out of them, 250 species are endemic. This means that they can only be found on Borneo. One of these species is Shorea faguetana, the tallest tropical tree in the world. This tree can reach almost 300 feet. Chinese consumers are big fans of the magnificent hardwood of some of these emergent dipterocarp species. This makes China the biggest market for lumber originating from Borneo. Before the Chinese logging companies started to use this hardwood, Japan was the biggest market for this product.

A Way of Life under Threat

The island still contains some hunter-gatherers who use blowguns to hunt, have 1,200 different names for various trees species, and believe that our world is one of nine different worlds that exist in the universe. These natives use bent branches and folded leaves to mark their paths through the rain forest. Days on Borneo, and its other islands such as Turtle Island, Borneo start and end with the sounds of cicadas, the unbelievable tunes of the bulbuls, the noises of gibbons, the chirping of the birds, and the choruses of insects.

Species become extinct before even being discovered by scientists. This is a tragic situation that should come to an end. The only possible way to stop it is to ban the clearing and burning of the forest. Unfortunately, the corruption around this extremely lucrative activity makes it very difficult to stop the deforestation and to ensue that strips of forest are preserved to serve as wildlife corridors. Palm oil is far from being a sustainable resource and there aren’t too many signs it is going to become one any time soon.

Bruno Manser Fonds is a Swiss NGO that has traced laundered earnings from palm oil and logging in Sarawak. This NGO has discovered that the former chief minister of Borneo and his family own huge and expensive properties in Ottawa, as well as a private golf course in Arizona, right in the desert.

The Role of the Consumer

It is sad that consumers aren’t aware of all these facts that make palm oil production such a sad and damaging endeavour. This is why we should do everything in our power to spread the knowledge about this real holocaust that is occurring on Borneo. Large scale deforestation has negative effects on an impressive number of endemic wildlife species that can’t do anything but become extinct. Diversity is beautiful and it is our duty to protect it and to help these animals live happily in their natural habitat. To kill them for margarine and lipstick is sad, indeed.