The Flushed and the Furious – Celebrities with rosacea | Bridgestone Libertadores 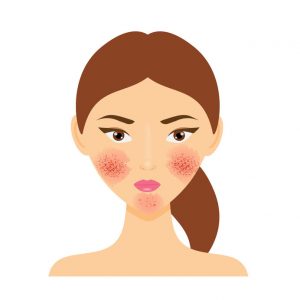 No matter how famous you are or how much money you have to spend on skincare and beauty, rosacea is such a tricky skin condition that even celebrities, world leaders and royalty can’t beat it.

Rosacea is an inflammatory and usually genetic skin condition that causes red flushed cheeks, nose and forehead and can be accompanied by small pustules, bumpy skin and patches of dry skin.

The first documented reference to rosacea, according the National Rosacea Society, was in the 1300s when Dr Guy de Chauliac, a French surgeon wrote about “red lesions in the face, particularly on the nose and cheeks.” He called the condition “goutterose” (French for “pink droplet”) or “couperose” (still a common French term for rosacea).

Rosacea is most common in fairer skin complexions and until recently it was assumed it only affected these skin types. However more recent into the condition, which is on the rise, has found it occurs in olive, Asian and black skin tones too yet is more often misdiagnosed in these skin types.

Age is another factor in the occurrence of rosacea, it tends to be more common in people over the age of fifty, although research has once again discovered that there is a growing incidence of it in younger people, maybe as a result of chemical overload form cosmetics and beauty products or environmental pollution.

There’s no actual cure for rosacea and symptoms are varied and multiple. It’s not just red skin that is the only characteristic of rosacea, skin sensitivity, dryness, bumpiness and spots are also common symptoms in addition to skin redness.

Management of symptoms is considered as the most effective way to treat the condition as the less often and the less severe each flare-up is, the less grip the condition appears to have.

In addition, avoiding highly perfumed or anti-bacteria skin and hair care products, as well as beauty or cleaning products, can help a great deal in reducing the frequency and severity of rosacea flare-ups.

Specific lifestyle changes such as avoiding direct sun, always wearing a mineral physical sunblock, avoiding spicy food and too much alcohol and generally trying to avoid sudden changes in skin temperature such as washing the face with hot or cold water can also help manage the condition. Stress and lack of sleep also contribute to rosacea flares, as do external irritants such as chlorine from pools, sweat, contact lens solutions and bacteria from touching the face frequently. Face masks are a complete nightmare for skin prone to rosacea.

Here’s some famous people who famously suffer from rosacea:

British actor and former Master Chef winner Lisa Faulkner was diagnosed with rosacea in her mid 20’s after it appeared suddenly on her face. She’s confessed to trying steroids that didn’t work. Her red face caused a nightmare for makeup artists on set and she has admitted in the past to not being able to leave the house without makeup due to insecurity about her red face. More recently Lisa says she has come more to terms with her skin condition and has learned to accept and manage her rosacea.

It’s not only older people who get rosacea. UK singer and songwriter Sam Smith revealed that he has rosacea even though he is only in his early 20’s. He has admitted that his love of red wine is the worse trigger for his rosacea flare-ups.

Prince William is a royal face we often see looking flushed and it’s known in royal circles that he sufferers from rosacea. Rosacea is a genetic skin condition and according to sources William’s late mother Princess Diana also suffered from the condition while his father Prince Charles is often photographed with a distinctly flushed complexion too.

Former US president Bill Clinton is well known to suffer from rosacea. Seeing as stress is a significant trigger for rosacea flares it’s likely that the pressure of being US president caused Bill the majority of his rosacea flare-ups.

Sex In The City actor Cynthia Nixon suffered from red, inflamed skin for years before getting diagnosed with rosacea. She has admitted to using a combination of oral medication plus gentle rosacea skincare to treat the condition and prevent it from getting worse. She’s also very vocal about the triggers for her rosacea, which include exercise, red wine and spicy food. Nixon is a spokesperson for the National Rosacea Society.

Actor Renee Zellweger, best known for her role on Bridget Jones’s Diary, has been suffering from rosacea for most of her career.

A strict and arduous beauty regime that involves her having oxygen sprayed onto her face during a process dubbed as facial sandblasting, is what Renee says she relies on to keep her rosacea under control.

Developing rosacea at the relatively young age of 31 was one of the things that caused the most distress and lowered self-confidence, according to writer and actor Lena Dunham. Lena’s rosacea was triggered by a course of corticosteroids she took for other health conditions. According to research by the National Rosacea Society, the use of corticosteroids can trigger rosacea.

Famous for her role in the sitcom Modern Family, Colombian actor Sofia Vergara has suffered from rosacea for over a decade. Sofia has admitted she has had to switch from many of her favourite beauty and cosmetic products to ones that are more suitable for skin prone to rosacea.

Sofia says that she is religious about removing her makeup at night, she avoids heavy moisturisers and facial oils, always keeps her face out of the direct sun, wears sunblock daily and keeps alcohol to a minimum.

The actor Brie Larson allegedly joked on Instagram once that a backstage interaction she had with chat show host Oprah Winfrey caused her rosacea to flare. Rosacea is linked to stress and anger, just saying.

Actor Naomi Watts had to deal with multiple rosacea flare-ups while filming the Netflix series “Gypsy” due to long stressful days and wearing heavy makeup all day.

← The Importance Of Regular Lift Maintenance Why Is Tree Surgery Important? →