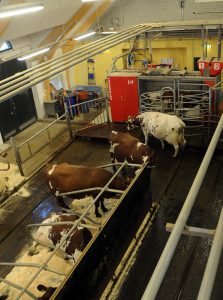 Robotic milking is an effective option for farm owners who are looking to streamline their operations and reduce the labour demands. It offers a flexible way of managing farms with as many as 250 cows. Since milking is voluntary, designing a barn with a layout that offers low-stress access, with plenty of space near the milking station and easy exit routes for the cows can help to increase the frequency of milking, and also reduce the need to fetch cows.

Lame cows are less likely to attend a milking station, so preventing lameness is important for maximising attendance. Reducing lameness by offering comfortable stalls, keeping the alleys clean, and offering easy foot bathing can greatly increase the efficiency of robotic dairies. Remember that with variable milking intervals, it’s harder to keep track of things like foot bathing, and to make sure that special needs cows are properly looked after.

By routing cows properly, keeping them separate at the milking station, and allowing freedom of movement, it is possible to address most of those challenges and save time and manual labour, allowing one herd worker to manage the rest of the jobs. This greatly increases the yield from the herd and can ensure that even if the number of cows is lower than capacity the yield is maximized. There are many benefits to these systems over the use of guided traffic and commitment pens, which can be stressful for the cows. A good routing system is better than free traffic too in cases where poor management and free traffic lead to excessive fetching.

Robotic milking is becoming more widely accepted as a way of keeping mid-sized dairy farms working well. It can offer some significant improvements in the lifestyle of dairy farm owners who manage herds of 40 – 250 cows. In 2009, there were around 8,000 robotic dairy farms worldwide, and by 2015 this number had increased to 25,000. Studies show that robotic milking can offer not just improvements in the efficiency of the farms, but also on the welfare of the herd. Cow behaviour, welfare and overall health improves, and udder health improves too.

To date, research into the design of robotic milking barns is limited. Field observations are inconclusive and while it is possible to look at examples from commercial operations, not all farms are eager to share their experiences. There are some interesting stories that may be worthy of note, however.

One recent study looked at 107 robotic milking farms in Europe, and found that those farms saw labour savings of 20% on average, although the savings varied significantly from farm to farm. One of the issues that the farms experienced was the need to fetch cows that did not voluntarily come to the milking station. The good news is that fetching 1-2 cows per station does not need a lot of effort, and if the routing system is well laid out the fetching can be done alongside cleaning the vacated stalls.

Another challenge is the average milking frequency per cow. In robotic milking stations, averages of 2.2 – 3.2 are seen; however, the range of frequencies can be incredibly varied, which makes it hard for direct comparisons to be made to fixed-interval milking. In some countries, such as Canada, there are quota policies and these make it hard for farmers to expand their operations. Robotic milking farm owners will often choose to have fewer cows per stall but look for cows that have higher milking speed to increase production compared to occupation rate. When examining milking times, a study by Tremblay et al. (2016) found that robotic milking farms have an average milking duration of 6.84 minutes, with 2.91 milkings per cow. With 50.5 cows per robot, this works out at 147 milkings per day.

One of the toughest decisions for farmers is whether to use guided or free traffic. Both options can impact on labour efficiency and cow comfort, making them important considerations. Often, when an automated milking facility is being laid out, it involves a commitment pen that is gated and that the cow cannot leave until it has been milked. This pen is accessed by a one-way, pre-selection gate. Guided traffic tends to result in more frequent milking and less resting time, and have not flagged up any issues with stress responses when heart rate, cortisol, and behavioural indicators are taken into account. You can find out more from Fullwood Packo.

← Avocados are the Best Fruit Ever! The Benefits of Using a Help Desk for Work →