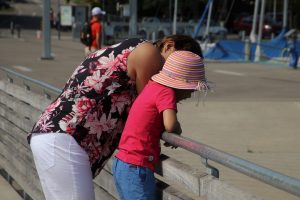 While some were furloughed, many nannies were laid off and didn’t receive any severance pay. According to a report by The Cut, at least twelve Caribbean nannies have even passed away due to COVID-19.

When the nation’s schools were forced to close to stop the spread of coronavirus, many nannies who normally commute to work were asked to move in with their employers to look after their children during the day. Some nannies felt forced to decide between their financial security and their health.

One nanny was told by a family that they were moving to the Hamptons and she could either come with them or would be let go from her position. The nanny had been travelling to and from work on public transport and was already worried about catching the virus and carrying it home to her own family.

The study surveyed 16,000 domestic workers and 52% reported not working during the week beginning on the 30th of March, and for the proceeding week the percentage increased to 68%

Of those surveyed, 66% said they were uncertain about whether they’d still have a job after the pandemic is over. Furthermore, 55% said they wouldn’t be able to cover their rent payments in April.

Approximately 33.3% of domestic workers come from foreign countries, and 20% do not have United States citizenship. According to data from the International Nanny Association, 95% of nannies get paid in unreported cash, making them ineligible for stimulus checks, unemployment insurance and additional government benefits. Furthermore, this practice gives nanny’s a moral dilemma every time they come to use their nanny tax calculator.

Some nannies were asked by their employers to stop caring for their children without any discussion about whether or not they’d continue to be paid for the duration of the pandemic. Many employers just said, “Don’t come any more”.

For domestic workers with low wages, lack of employment security, zero entitlement to government benefits or programs, the coronavirus pandemic has spurred grave financial insecurity and forced nannies to contemplate how they will cover their rent, pay their household bills and afford to feed their families.

Yoon explained that domestic workers in the US have been massively undervalued for a while and it is a chronic problem. They went on to explain that looking after children can encompass everything from newborn care to early childhood development and nutrition. The work nannies do often isn’t viewed as “real work” that merits compensation since it is carried out in a family home and many people don’t think of someone’s home as a place of work.

In today’s world, many of these problems stem from gender inequality. Work done by women isn’t always seen as “real work” in the same way work carried out by men in conventional roles outside the home is. Taking care of children is a woman’s natural role in society according to outdated attitudes, so the work nannies do is often rendered “invisible”.

Coronavirus restrictions put in place varied between states, and in many states some restrictions have been relaxed. Some nannies find themselves being asked to return to work, which is causing some concern given the lack of a proven anti-viral treatment or vaccine.

Yoon explains the truth is that the virus doesn’t discriminate and people we come into contact with are just as safe (or unsafe as the case may be) as we are.